Ultranav was founded as Sociedad Naviera Ultragas Ltda.in 1960 by Captain Albert von Appen (1901 - 1971), who arrived to Chile from Hamburg in 1937 as a representative for the Hapag and Norddeutscher Lloyd shipping companies. The company was amongst the first to be engaged in the transport of gas in liquid form having constructed as its first vessel the “Ultragas“, a 90 cubic meter capacity gas carrier newbuilding. With an overall length of 23 meters, it was probably the smallest vessel of its kind ever built. Placed into service in the southernmost Patagonia region of South America, it vastly improved the logistics for local gas producers and consumers, replacing the traditional transport of gas in steel bottles.

Captain von Appen was subsequently joined by his two sons, Sven von Appen and Wolf von Appen, who successfully developed and diversified the company. Ultranav initiated the expansion of its businesses and continued strengthening its position initially in Chile, later in Latin America and finally reaching a global level through different trades and segments. This growth has come in the form of different companies where Ultranav has developed its roles as owner, charterer and operator of merchant vessels spanning a broad spectrum of fleets specialized on international and cabotage maritime transport.

In deep sea shipping activities Ultranav today operates and owns tankers for the transport of crude oil, refined products, and chemicals; dry cargo bulk carriers, multi-purpose dry cargo and container vessels, as well as specialized vessels for the transport of liquefied gases. Because of this broad diversification in different segments the company changed its name to Naviera Ultranav to better integrate its different businesses and subsidiaries. Since 2012 Ultranav provides its services through its divisions Ultratank and Transmares from Chile, Ultrabulk and Ultragas shipping companies from Denmark, Antares Naviera in Argentina, Naviera Transoceánica in Peru and Horizon Shipping from the United States of America.

The company is today led by Dag von Appen as Chairman of the Ultranav Advisory Board and CEO. 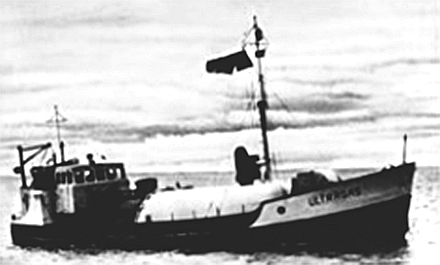 Ultragas started operations in 1960 with a gas carrier only 23 meters long and 90 cubic meters of capacity, being the smallest vessel of its kind ever built.