The worldwide focus on climate issues is accelerating at a fast pace. According to IMO, shipping accounts for 90% of the world trade, and as such the industry has a huge impact on the environment and climate. Via IMO we are committed to reduce our emissions with 40% per cargo tons-mile by 2030 compared to 2008 levels. Globally, the focus on emissions reductions is increasing day-by-day and we have to continue to innovate, collect and analyse data, invest in equipment and systems as well as raise general awareness both onshore and at sea.

The Ultranav group have outlined a decarbonisation strategy built on 8 pillars. The goal is to play an active role in exceeding IMO’s mandatory targets of reducing CO2 intensity by at least 40% until 2030 and total GHG emissions by 50% until 2050.

Within each of these 8 pillars, Ultranav has identified a list of projects and initiatives, existing as well as new ones, to be further pursued in the effort to support the sustainability agenda. Taking on the climate challenge is not all about regulations and restrictions. It also offers a variety of opportunities for us as a group as well as for the shipping industry and society at large.

The Ultranav Group support initiatives and means to stop corruption, hence it became a member of Maritime Anti-Corruption Network. 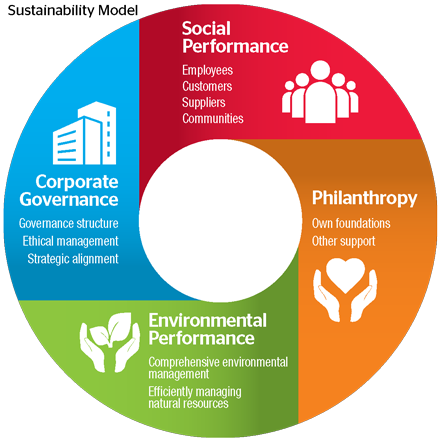 It’s all about caring

Social performance activities have been supported by the Group throughout its history, where focus is been directed towards two main groups, namely our staff, their families and local communities. The efforts made in such areas having proven to be the most effective in terms of achieving sustainable development.

Whilst the Group is established globally, its roots and majority of its activities are based in the Americas, and focus remains on supporting the areas in most need where we are active in Argentina, Brazil, Chile, Colombia, Ecuador, Panama, Peru and Uruguay. Considerable financial investment is made to support the Group Initiatives and which is complimented by considerable staff support in terms of their voluntary private time investment made to supporting the process and specific events.